Time to see what’s staring us in the face?
by Melanie Newton
#Heritage #Mining #Nature #Recovery

Melanie Newton, project director, shares the story of her family’s heritage in mining and offers her support to farmers and landowners who are facing the responsibility of navigating change and saving the planet.

For many years, a statue entitled The Ideal Miner towered over the entrance to Big Pit Mining Museum, Blaenavon in the South Wales Valleys.  Now retired indoors following significant restoration, it stands in the pithead baths exhibition at Big Pit.

The miner who posed for this statue back in the 1950s was Thomas Idris Lewis, a man from the Dulais Valley in South Wales, and my maternal grandfather, my Dadcu. Sadly, he’s long gone now, dying of heart disease in the early 1970s. 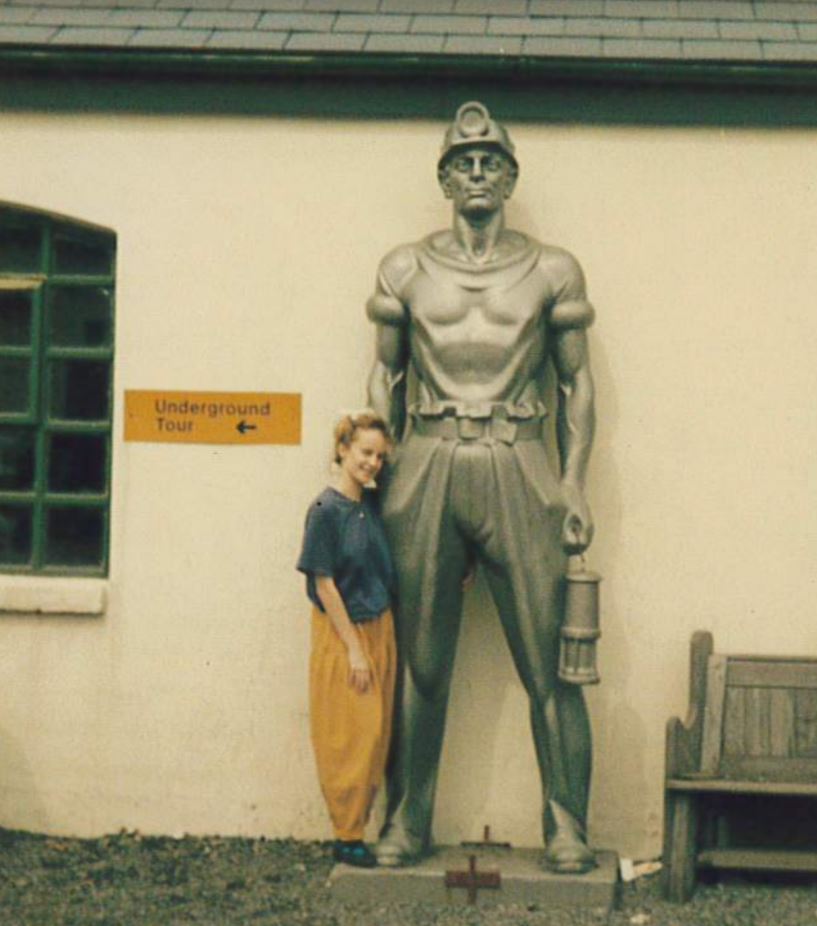 [Photograph of me age 16, c.1985 with my grandfather’s statue. Please excuse the dodgy 80s trousers]

My grandparents, Mamgu and Dadcu, lived in a tiny bungalow Tan-y-coed with an attic where Dadcu would sit for hours and write when he wasn’t working down the mine.

In 1966, he wrote a story called Looking back over the years. In the Foreword he begins:

“By the time my grandchildren reach my age, all that I have written in this book will be history to their children”.

At the age of 65 in 1966, he wouldn’t have foreseen the miners’ strike of 1984 and the devastating impact of mass pit closures would have on mining communities across the UK. Climate change would certainly have been an alien concept to him.

The blow of the miners’ strike and eventual closures hit communities whose lives were entirely dominated by a mining culture. It is testament to the strength of the people that communities in this area have survived. There is still an enviable closeness of the people, but the economies have not recovered so far. Not that I’m aware of anyway.

It is interesting to consider why the economy has struggled to get back on its feet. I think geography and the Industrial Revolution have a large hand to play.

Very recently, I met Chris Blake who works on the Skyline project. On a chilly and rainy winter morning in Treorchy, Chris and I eventually found somewhere to share a cup of tea and a KitKat in a tea shop in the town so I could find out more about his work.

With funding from the Friends Provident Foundation, Chris is working with three communities in the South Wales Valleys to re-imagine their future, their home and their landscape. Chris showed me a picture that we both feel captures the story of how these communities have come to be.

The first picture shows a bustling town, the town that I’m sure most of the people who live there would see and describe. 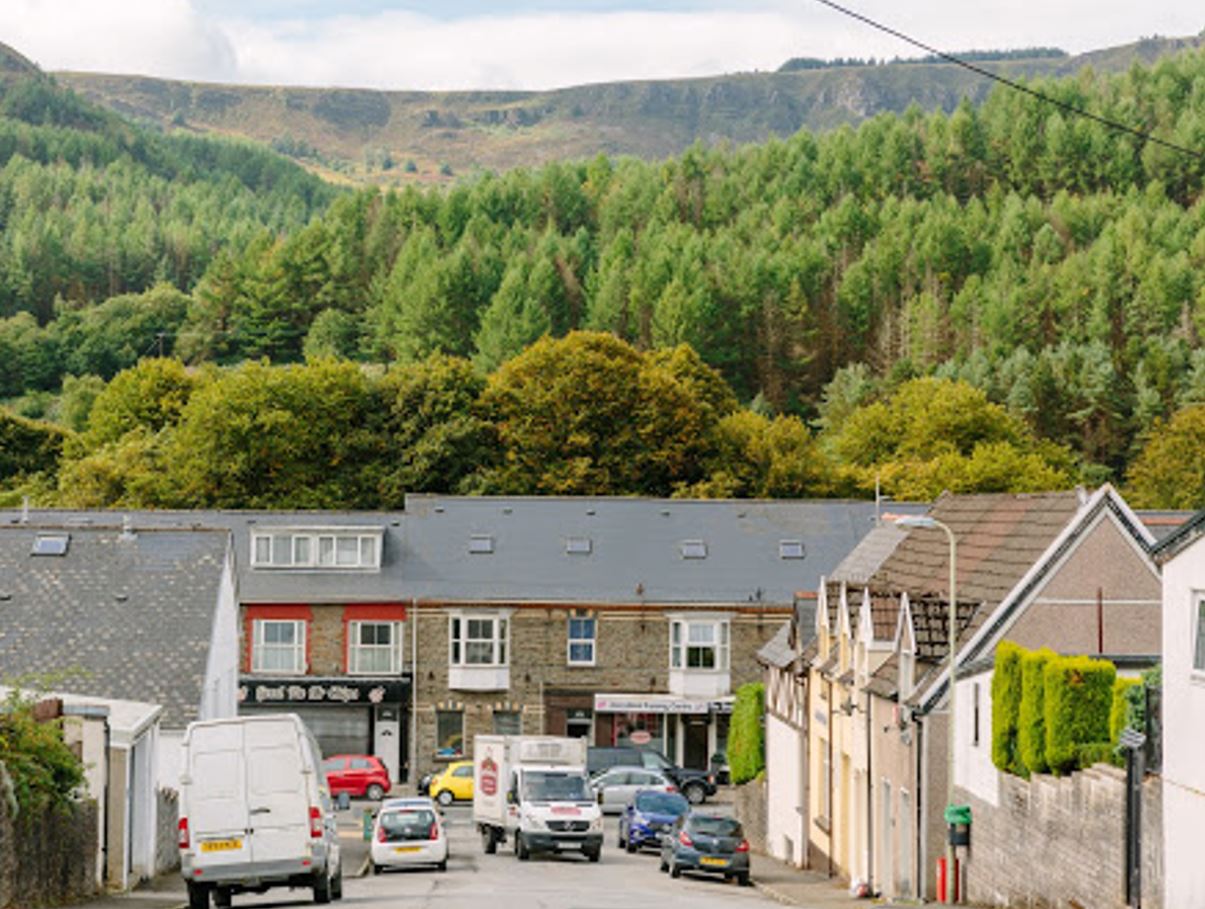 The second picture shows what else is there. This photograph isn’t Photoshopped – the trees are really there and really that close.

When you’re standing in the high street, because of the sharp ‘V’ shaped valleys and the narrow streets lined with rows of terraced miners cottages, you’re simply not aware that there’s another landscape sitting metres behind. I’ve stood there and seen this for myself. You simply can’t see it if you’re walking down the street.

But standing there, I also couldn’t help but wonder about this loss of perspective. With a culture so focussed on mining – not only as an industry but also as a way of life – perhaps my community didn’t notice what was happening right in front of our eyes?

My father was a miner, and we weren’t a particularly ‘outdoorsy’ kind of family, so apart from walking down the ‘rec’ to play, I wasn’t at all engaged with the landscape where I lived.

My friend Richard Parfitt, who I follow on Facebook, has brought to life, and given me a whole new insight into, the Valley where I grew up. He has become a passionate hill walker and takes beautiful photographs of the hills and mountains surrounding our valley. I often look at his photos and think “where’s that?” I simply don’t recognise it as my childhood home because that’s not what I saw or was encouraged to see.

It gives me such pleasure to see the industrial valley photographed to show how it really looks. 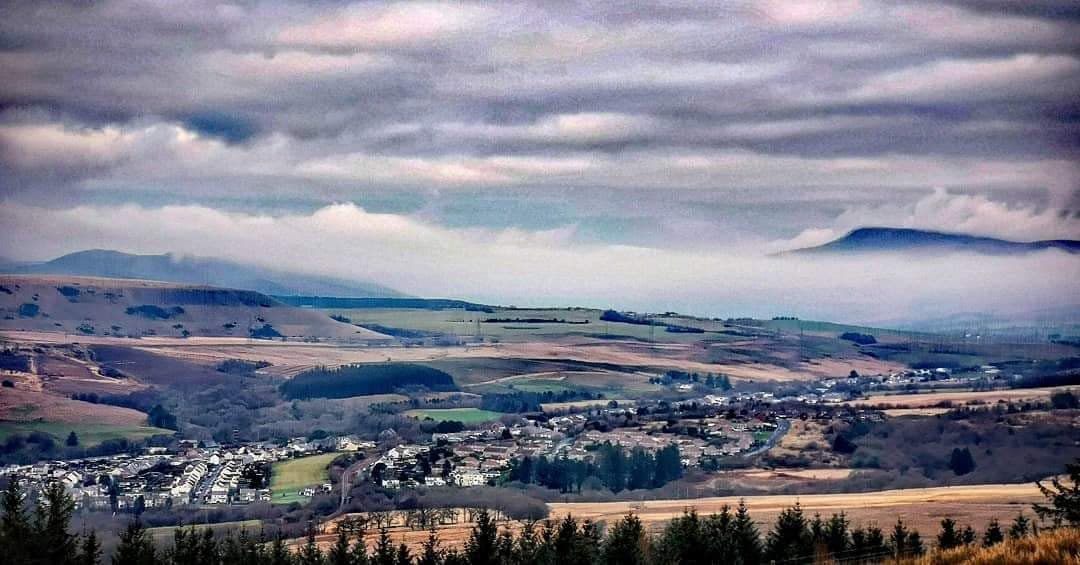 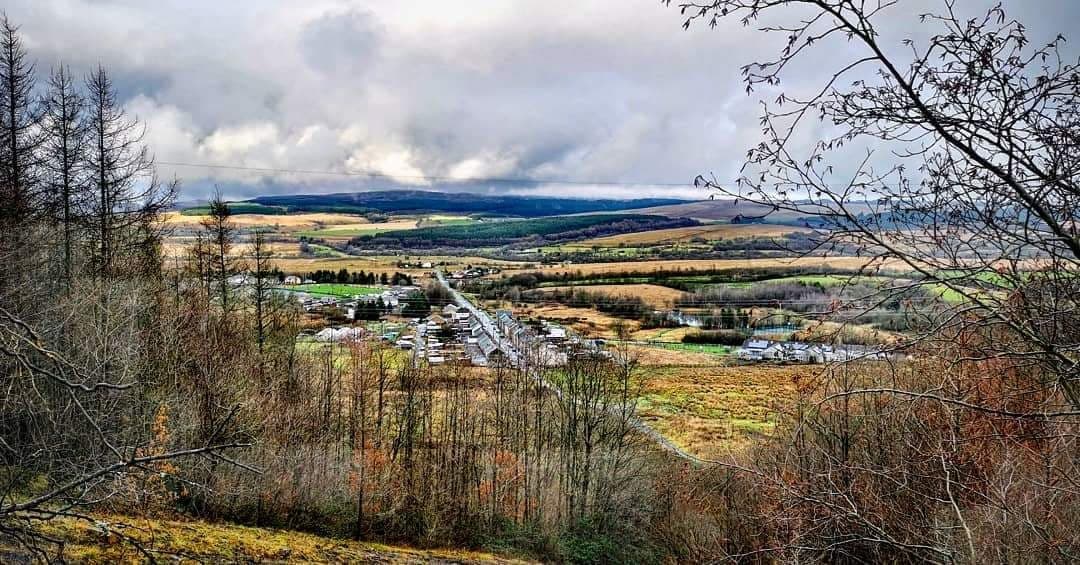 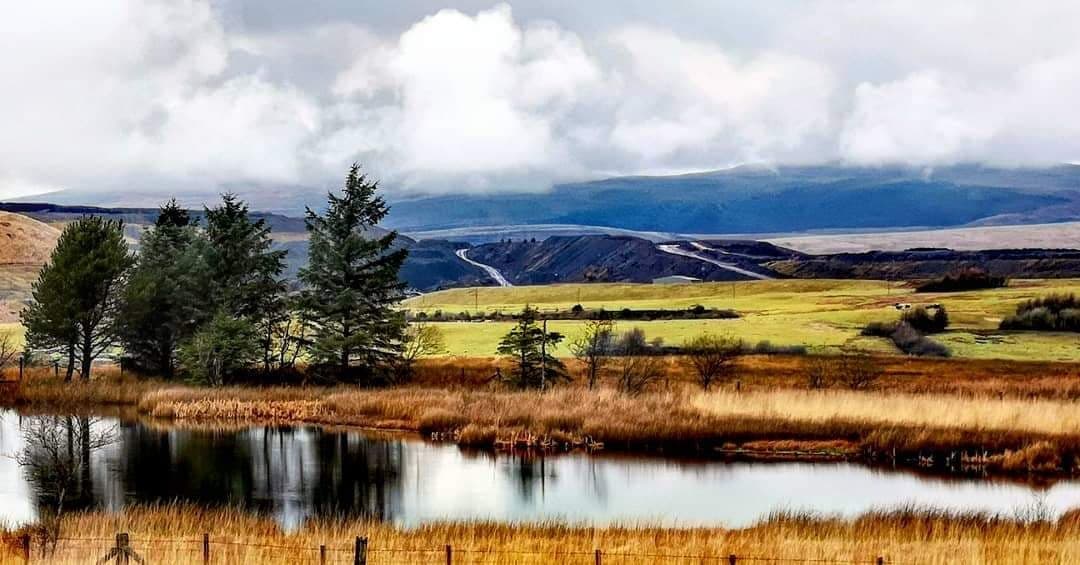 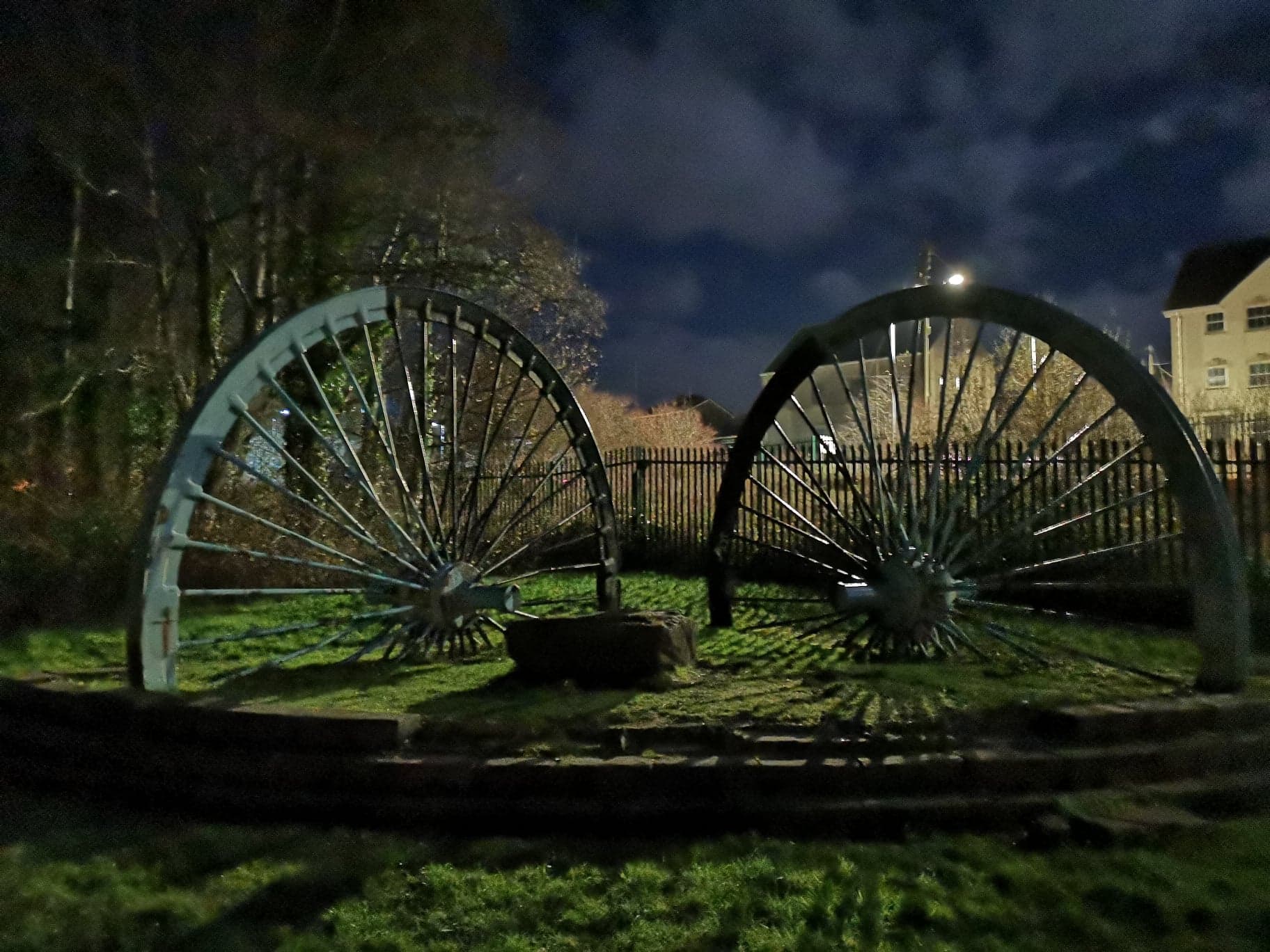 I don’t want to fall into a trap of romanticising the past. Mining was a very tough lifestyle for everyone who was part of it. But the bitterness of the 1980s strike, and the devastating impact it had on the communities means that it’s been very difficult to evolve and change. It is, after all, so much more difficult to pick yourself up when you’ve been dealt such a bitter blow.

I believe it would have been so much better if time could have offered mining communities an opportunity to evolve and change. It may be controversial to say it, but the reality is that fossil fuels are such a big factor in climate change, even if mines hadn’t closed in the way they had, I don’t believe the mining industry couldn’t have carried on in the same vein. It would have had to evolve, and so too would have the communities.

But at least they would have had the chance to catch their breath, consider next steps, and find solutions.

Over the last few months, I have spent a lot of time talking to people about Summit to Sea. Farmers have welcomed me into their homes, given me hours of their time, made me cups of tea and fed me cake, and talked to me about the future of farming as they see it.

For most of us, Brexit presents a future that is worrying, but farming is one of the industries that is facing this head-on. The potential changes that farmers are looking at are life changing. One of the things that has struck me most during my visits is a true sense of contentment that farmers feel. They love what they do, they care about their animals, therefore it’s natural that they don’t want anything to change. Many of them come from a long line where agriculture has been the only path for their fathers and forefathers.

Like a lot of industries, farming is facing a future which makes change inevitable. I hope that the project can support these changes whist giving the farming communities an opportunity to forge their own path. I would like Summit to Sea to play a part in helping them tohold on to the parts of farming that they hold dear, and find ways to reinvent their industry that secures not only the industry but the communities, the culture, but most importantly of all, the future of the planet.

Because the truth is, as land owners, they could hold that precious future in their hands. 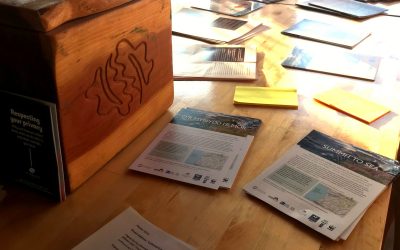 What you said at our drop-ins

by Siân Stacey#community #community engagement #learning #listening #Spring eventsWe have held nine drop-in sessions all over the project area in the last few months, and more than 150 people joined us to discuss the project. Thank you to everyone who participatedWe...

We’ll be holding more drop-in sessions in 2020, and have been reflecting on our sessions last year 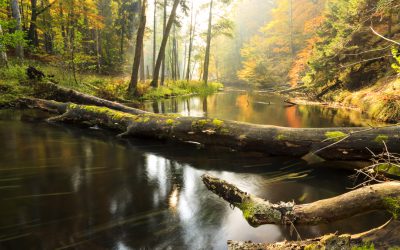 A new Chapter for Summit to Sea

Changes being made to its governance

Summit to Sea, a joint initiative working to benefit the local economy and wildlife in mid Wales, announces that one of its eight partners, Rewilding Britain, is stepping aside from the project.